For the movie Noah, Director of Photography Matty Libatique needed to create the effect of the Tzohar, a supernatural light source which was an integral part of telling the story.   Matty had previously worked with LiteGear on several projects (Iron Man, Iron Man 2, Cowboys & Aliens) and this project had some very specific needs.  The Tzohar needed to have an organic flicker feel, and a very low profile so it could fit into tight spaces. It also needed controls for intensity and flicker rate, and most importantly, have an incredibly powerful output.  With those requirements in mind, Litegear’s electronics guru Lee Parker designed a custom circuit to handle the task. Parker programmed a firelight flicker effect to Libatique’s and gaffer John Valez’s liking. The light source consisted of 15 of LiteGear’s color correct VHO PRO emitters which provided a high volume of light in a small package.  The entire height of the system was under 1/2 inch in height, 1 3/4″ in length and 1 1/2″ wide. Most importantly, at full power it put out 35 footcandles at 12″ 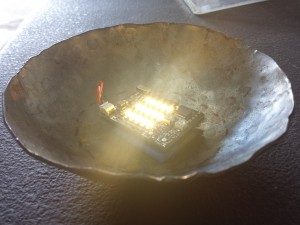 Two small potentiometers hidden on the circuit board allowed flicker rate and intensity levels to be adjustable for Valez and his team to have on set control of the light output.   A battery designed for an ipod nano powered everything and the end result was a solution with power source, light engine, and controls all built into one unit. 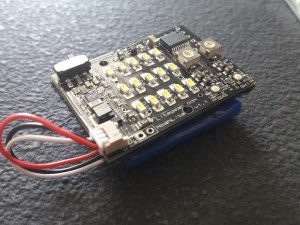 The small size meant it could be held in a hand,  fit into set pieces, and used as a source for lanterns.  6 units were provided to the production and the entire project was put together from concept to execution in under two weeks.  “To create a realistic fire effect you often need multiple sources.” said gaffer John Valez, “We would put a few of the these units together and it worked great. We were very happy with the end result”